My Selection of Stocks for Medium to Long-term Investment

I shared the following:

1) A list of sectors which are rated “overweight” by Kenanga, along with the top picks or preferred stocks in these sectors

2) A list of my preferred stocks covered by Kenanga, based on potential 1-year total return.

This afternoon, the Malaysian government announced support amounting to RM10 billion for the small & medium-sized enterprises, which would be badly hit by the Covid-19 outbreak. This is the second good news for the day.

The first good news was a smaller increase in total cases and total death for April 5- which could mark a temporary peak for Covid-19 cases & death.

Chart 1: Daily increase in total cases and death from Covid-19


With the positive developments, our market may continue to recover. If the index can surpass the 1350-1353 level, we might attempt to climb back above the long-term uptrend line at 1400-1405. At this point, I doubt the index can climb above this resistance as the Covid-19 outbreak and its economic impact are just beginning to be felt. Based on these concerns, I think we should remain cautious in our investment plan.

(UPDATE) Overnight, US markets rallied with DJIA rising 1628 points (or, 7.7%) to 22680 and Nasdaq rising 540 points (or, 7.3%) to 7913. The good point to note is that yesterday's market highs & closes for DJIA and Nasdaq were both higher than what were recorded on March 26. This is a sign of a tentative short-term uptrend move, where you have a higher "low" (or, trough) earlier and now you have a higher "high" (or, peak). The higher "low" was on April 1-3 as compared to previous low on March 18-23, while the higher "high" was made yesterday as compared to previous high on March 26. While this means that the rally may have legs room to go, the immediate resistance is just overhead at the high recorded on March 13. So, tonight will be an interesting night for US markets. 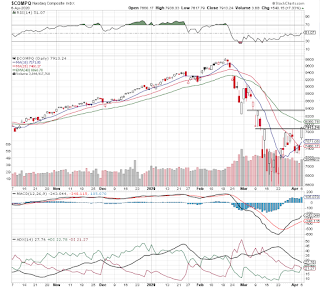 In the past few days, our market has rebounded substantially. Many investors are asking the perennial question: What can I buy?

Today, I like to share with you one of the ways that you can make full use of your broker's substantial resources to compile your own stock buy list. If you are not too savvy, you can work with your remisier to come up with this listing. I do this on a fortnightly basis for my clients when the market is relatively quiet but during the past few weeks, I have been updating my listing on a weekly basis. Go here for an example of Kenanga's Rating Summary dated 6 December 2019.

These are my steps to produce a listing of selected good stocks that have dropped substantially.


These are my 2-page listing (in 2 pages for easy referral) which I sent to my clients last weekend.

Stock ratings in Kenanga Research can be:


As a remisier, I like to stay engaged with my clients during this challenging period. I'm always a cautiously optimistic person. I believe that a bear market is a good time to buy stocks. The problem is how to buy stocks at good prices when everyone around you is looking to sell off their stocks. In times like this, we have to remind ourselves that the exact opposite always happens in a bull market, when we would have a very difficult time selling because everyone else is so busy buying. So, my advice is to stay calm, stay engaged with the market and of course, stay at home when the Movement Control Order is enforced.

DJIA soared  2113 points or 11.4% to close at 19722 yesterday. The huge rebound happened after Fed's aggressive monetary easing as well as buying of bonds plus progress made in drafting a huge spending bill of USD 2 trillion to support American consumers and businesses from the fallout from Covid-19.

DJIA tested the horizontal line at 18000 before rebounding. Its immediate resistance will be the psychological resistance at 20000.

Like the rallies in the US markets, our rally is extremely sharp due to the very steep fall which witnessed happened over the last 1-2 weeks. Nevertheless, we must be mindful that the worst of the Covid-19 pandemic has yet to pass. The next 2 weeks may see more cases reported in Europe and America. If this scenario were to pan out, the market rally will falter. You should consider taking profit for some investment as well as selling off some weak stocks in your portfolio. Good luck!

I have studied our current market meltdown along with the market meltdowns in 1998 & 2008. My objectives were:
1) to identify the set-up for the start of the market uptrend in 1999 and 2009; and
2) to assess the extend of the current decline & the potential for a decent rebound.

The set-up for both market uptrends in November 1998 (the numbers are in blue) and March 2009 (see the numbers in green) are:

The failed market uptrend in June 1998 fell short in one area, namely after +DMI had crossed above -DMI, they did not diverge but instead became entangled and eventually reversed. This could be due to the failure of the index to go above the 40-week SMA line, which eventually reversed downward.

In this round of market meltdown, FBMKLCI has dropped too sharply that we are a long way from achieving a set-up that we saw in November 1998 or March 2009. However, it is possible that we may have a decent rebound, akin to what we saw in June 1998 when the index rallied to test the 40-week SMA line. I consider this to be the optimistic scenario for the market for next few days or weeks.

While we live day-to-day with negative news relating to Covid-19, we should take comfort that Asian societies seem to be more discipline and our stock markets and currencies are much lower to begin with. Thus, when situation improves, fund managers would find Asian equity to be a better investment proposition than the equity of other markets.

For now, let's adopt a cautious approach. If you choose to buy in the market, let's choose the blue chip stocks and accumulate slowly. Good luck!!

Finally, FBMKLCI has a decent rally. As at 2:55 p.m., FBMKLCI was up 66 points to 1284. At this moment, we should just regard this as a technical rebound! Nonetheless, it is still very good as it has surpassed the reaction high of 1278 recorded on March 17. It might continue to climb higher and test the low of 1325 recorded on March 13.


A market with occasional strong technical rebound will draw in investors who like to buy good blue chip stocks for long-term investment. This will help to cushion the sharp decline which we had seen for the past few days. Having said that, we may not have seen the bottom in this market. Be careful and buy slowly.

If you look at the weekly chart below, you will see the extreme drop in the market last few days. In my 26 years in the market, I have not seen anything quite like this. Don't be surprised that we might have a good & maybe even strong rebound once the market has confidence that we are doing something to fight Covid-19 pandemic.

Note: At the time of writing (9.25 am), the market is recovering a bit. Hopefully this can be at least a temporary bottom after a horrendous few days we had.