Yesterday our FBMKLCI rose 30.84 points to 1538.53. It broke above the 200-day Simple Moving Average ("SMA") line at 1520. It may soon test the intermediate downtrend line (in red) at 1550 soon. The same pattern can be seen in FBMEMAS chart. Look at the FBMKLCI and FBMEMAS below.

The question of whether the market has now satisfied the conditions laid down in my earlier post (here) to call the beginning of a market's next upleg must be examined again. To wit:

The set-up for both market uptrends in November 1998 (the numbers are in blue) and March 2009 (see the numbers in green) are:

The failed market uptrend in June 1998 fell short in one area, namely after +DMI had crossed above -DMI, they did not diverge but instead became entangled and eventually reversed. This could be due to the failure of the index to go above the 40-week SMA line, which eventually reversed downward.

As at yesterday, we can see that all the above 4 conditions have been satisfactory.

Like in the past 2 earlier crisis periods, we are now above the 200-day SMA line, which signals the entry into the bullish phrase in the market.

Based on the above, I believe the next upleg in the market has begun. Some may still want the main indices (FBMKLCI and FBMEMAS) to break above their respective immediate downtrend lines before pulling the trigger. It is still good to play it safe and by buying into the laggards (say, Maybank over PBBank) and doing so progressively. Good luck.
Posted by Alex Lu at 6/04/2020 09:00:00 AM No comments: Links to this post

The sharp drop in revenue was attributed to disruption from the Movement Control Order (MCO) in the last two weeks of quarter one, which caused consumers to turn to cheap, black market cigarettes. Operating expenses were marginally lower due to improvement in operational efficiencies but this was not enough to offset revenue loss, resulting in a decline of 48% q-o-q or 41% y-o-y  in profit from operations to RM71 million.

BAT (closed at RM11.72 last Friday) is now trading at a PER of 10.9 times (based on the last 4 quarters' EPS of 107.8 sen). BAT has paid out quarterly dividend payment totaling of 105 sen over the past 4 quarters; thus giving a Dividend Yield of 9.0%. Though its valuation looks attractive, the concern for many investors is whether BAT can stop the continuous decline in both revenue and profits, since the MCO period covers the whole of the next quarter. Only time will tell.

BAT broke below its medium-term uptrend line, SS at RM12.60. It may slide to the horizontal line at RM11.00.

Based on a weak financial performance and a bearish technical outlook, BAT may be a contrarian stock for long-term investment. All the negative factors could be substantially factored in the share price which is trading at a PER of 10.9 times and a dividend yield of 9.0%.

I wish all my readers a safe and blessed Hari Raya Aidilfitri.

Over the past 1 month, glove stocks' prices have rallied spectacularly. The top 4 glove makers have risen between 37 and 168% since end of March.

The rise is so sharp that the top producers are now trading at PER of 44 to 71 times. If that is not enough, analysts are falling over one another to upgrade their target prices, giving each stock even higher target price.

This afternoon, one of my clients sent me a table of the market capitalization of our banking stocks and  the top 4 glove makers. It is indeed a surprise to see Harta and Topglov commanding market cap comparable to HLBANK and RHBBANK.

When will the rally in glove stocks peak? I used an unorthodox approach in determining the potential peak for glove stocks by looking at the unadjusted price charts of Harta, Topglov and Kossan.

All these 3 stocks have consistently been giving out 1-for-1 bonus issue (1-to-2 share split is very similar to a 1-to-1 bonus) over the past 10 years. If you looked at the unadjusted price charts, each of these stocks had subsequently rallied back to their respective unadjusted prior peaks- which effectively means that their share prices have doubled up during that period. There were only one occasion when Harta and Kossan's rallies had exceeded their prior peaks- in 2018 and 2016 respectively. Today, Topglov and Kossan share prices are very close to their prior peaks. Harta share price has another RM2.00  to go to reach its prior peak.

I have left out Supermx because it had not been consistently giving out bonus shares. It may be an outlier in this pact.

In my opinion, the potential upside for the top 4 glove stocks is now fairly limited. It is advisable to take some profit on these stocks after the strong rally, notwithstanding the analysts' very favorable rating and extremely high price target.
Posted by Alex Lu at 5/21/2020 03:49:00 PM No comments: Links to this post

The market has been on the roll in the past 6 days. Volume has increased substantially above 7 billion units traded a day. In fact, there were 3 days of 9 billion units traded (on May 13, 15 & 19) and there was one day of 11 billion units done (on May 18). While the play has been concentrated in the 2nd and 3rd liner stock, even the blue chip stocks have seen a pick-up in volume as well as price gain.

Yesterday, FBMKLCI surpassed the recent intra-day high of 1429 recorded on April 20. With MACD starting to climb up, after entering the positive territory in late April, and ADX beginning to turn up, though still below the 25 mark, we may be seeing another upleg in this rally. If FBMKLCI can break above the 100-day SMA line at 1455, it has a clear path to the test of the psychological 1500 mark as well as the 200-day SMA line at 1520 in the next 1-2 weeks. Bear in mind that the long-term downtrend line, RR will pose a resistance at 1550.

The big question in every investors' mind now is whether the bear market is over. The quick answer is a NO. I have to refer you back to my post in March where I compared the current downturn to what we had in the Asian Financial Crisis in 1998 as well as the Global Financial Crisis in 2008 (here).

In that post, I lay down the set-up for the start of market uptrends, as witnessed in November 1998 (the numbers are in blue) and March 2009 (see the numbers in green) are:

The current rally is still developing (see the numbers in black) with conditions (2) and (3) met while conditions (1) and (4) are still pending. We can refer to the failed market recovery in June 1998 which didn't meet condition (4) as well as not fully satisfy condition (1) i.e. unable to cross above the 40-week SMA line.

Some players believe that even if FBMKLCI were to falter, the play in our market will continue as retail players are all charged up to punt on 2nd and 3rd liner stocks. I am inclined to believe that the rally in lower liner stocks may continue if the FBMKLCI is still heading higher. Good luck to all in your trading & investing. As always, be careful out there.

O&G stocks may rally next as WTIC & Brent crude oil prices have reversed. The reversal is achieved when they broke above the neckline of their respective inverted head and shoulders formation. See charts below.

Among the lower line O&G stocks, we can see Velesto has broken above the line connecting the recent high at RM0.16, It may go to RM0.20 and, beyond that, to RM0.26.

Armada has broken above the horizontal line at RM0.20. It will test the next horizontal lien at RM28 and, beyond that, to RM0.33.

For Sapnrg shareholders, you have to wait for Sapnrg to break above the slopping line at RM0.11.

Since these stocks have not gone up too excessively, you can consider them for your trading purpose or medium-term investment. Good luck.

GPacket-WB: Why Is it trading at a discount

The bullish breakout is probably due to the news concerning the partnership between GPacket's Kiplepay and Tencent Cloud to offer electronic know-your-customer service known as KipleID e-KYC targeting banks and other financial institutions. For more, go here.

On the surface, everything looks good since the news flow is positive and the technical outlook is bullish. However, there is a nagging issue of GPacket-WB trading at a discount of 28% since its exercise price is RM0.40 and there is also no concern about short tenor as its expiry date is on Nov 24, 2023. The warrant is trading at below its intrinsic value of the warrant is RM0.84!!

The dichotomy between both securities achieving new highs and the warrant trading at a discount is more than a bit perplexing. It is actually worrying. In the stock market, where every sen counts, arbitraging activities should have taken place, with shareholders selling off their shares (thus depressing the share price) and buying the warrants (thus pushing up the warrant price) for the purpose of converting to shares. Why isn't this taking place now?

In the past, we have seen similar development in other stocks & their underlying warrants, which were eventually resolved with both the share price and warrant price dropping back when the players exit abruptly. When will this happen to GPacket and GPacket-WB? No one knows but the market.

If you have GPacket or GPacket-WB, you should track it closely and take profit along the way. If you have both securities, the one to sell first should preferably be the share. Good luck!
Posted by Alex Lu at 5/15/2020 03:56:00 PM No comments: Links to this post

What's the Rally in Glove Stocks Telling Us?

In the past few days, glove stocks have risen steadily. That steady ascent has gone exponential yesterday and today. The rally has also spilled over to stocks that would benefit from Covid-19, such as Ocncash (producer of non-woven material used in the production of face mask) etc.

Covid-19 pandemic has created increased demand for gloves, which led to higher sales volume and higher average selling prices. The sharp and urgent rally in glove stocks seem to suggest that concern or fear of the pandemic has returned. Is this due to the opening up of the economies around the world, which is causing increased concern or fear of a spike in infection cases? 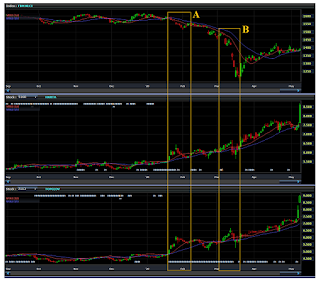 This is my interpretation; when the fear of the pandemic started to rise, investors would buy into Harta and Topglov while selling off other stocks. This led to higher prices for Harta and Topglov while FBMKLCI weakened. When the fear of the pandemic overwhelmed investors' profit-seeking instinct, the sell-off would be broad-based - including a sell-off in glove stocks too.

If this interpretation is accurate, then we may be seeing a build-up of fear of the pandemic which has led to the current rally in glove stocks while FBMKLCI has been moving sideways. When will the fear of the pandemic overwhelm investors' profit-seeking instinct, leading to a sell-off in the market? Only time will tell.

For those who have glove stocks or stocks related to Covid-19, such as Ocncash, Hexza, HLT, it is advisable to take some profit in this super-charged environment. Good luck.
Posted by Alex Lu at 5/13/2020 02:50:00 PM No comments: Links to this post