Notion: Returned to profit, for now

For QE30/6/2015, Notion returned to profitability with a net profit of RM7.3 million as compared to a net loss of RM4.5 million in the immediate preceding quarter. Revenue dropped 3% q-o-q to RM62 million.

The improved performance was due to increased operating  profit, attributable to higher average selling price - arising from the continued strength of the USD against the Ringgit. More importantly, the Group recorded an extraordinary gain of RM 8.9 million arising from the sale of a factory building and land - which enabled it to achieve a PBT of RM15.0 million.

Notion (closed at RM0.44 yesterday) is now trading at a PBR of 0.4 time. I am unable to compute a PER for Notion as it is not profitable in the last 4 quarters (combined). I have serious doubt that this group can operate profitably in the future, given its poor track record in the past few quarters. It took an extraordinary gain & a sharp drop in the Ringgit to help it to return to the black. One cannot count on these favorable factors all the times. 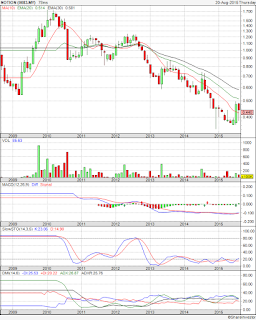 Based on uncertain financial performance & negative technical outlook, Notion is a stock to be avoided.

Note:
In addition to the disclaimer in the preamble to my blog, I hereby confirm that I do not have any relevant interest in, or any interest in the acquisition or disposal of, Notion.
Posted by Alex Lu at 8/21/2015 08:44:00 AM