Juan Kuang (M) Industrial Bhd (“Juan Kuang”) is a Second Board company that is involved in the manufacture & supply of wiring harness systems (for motor vehicles) and auto accessories as well as being an importer & wholesaler of electrical products & access.

If you compared the last 4 quarterly results with the preceding 4 quarterly results, you can see that turnover has increased by 33.6% from RM 166.8 mil to RM 222.9 mil. Unfortunately, net profit declined 2.9% from RM 15.0 mil to RM 14.6 mil. EPS has similarly dropped marginally from 28.36 sen to 27.53 sen. The decline in profitability has been attributed to increased raw material cost which Juan Kuang has not been able to pass on to its customers.

Based on the closing price as at July 5 of RM1.10, the stock is trading at a PE of 4 times or 0.8 times its book value. This is fairly cheap.

The chart below shows that the stock is in a gradual uptrend. An imperfect “uptrend line” has been drawn and, from it, we can see that the RM1.00 levels should been a strong support. [The uptrend line drawn has ignored the poor prices during the June to August 2004 period.] 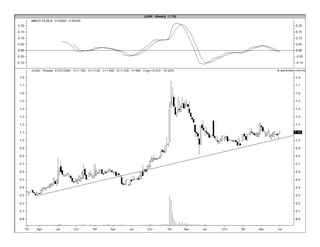 Juan Kuang has carried out a big expansion program in January this year which has doubled the size of its production floor area. This new factory, which has been leased from Tzel Assets Sdn bhd, has increased the production floor area by 137,072 sq. ft. from the existing area of 142,990 sq. ft. It is used for the production wire harness systems. With this expansion, the turnover should increase by about 20-30% this year.

The main weaknesses noted are:
• Juan Kuang has not paid dividend in the past 4 years.
• The stock has very low trading volume.